Article by Nicholas Kristof from 26 September 2006

Article by Nicholas Kristof from 1 October 2006

and her new book:

Here are some other links for Louisa that people might enjoy:

I lived in Ndélé, Central African Republic, in 1976-78. Ndélé is a town of about 5000 people (at that time) in the prefecture of Bamingui-Bangoran in the northern part of the country. The area has a rich history, documented by Dennis Cordell (in his PhD thesis at the University of Wisconsin, under Jan Vansina) in the mid-70s after he interviewed everybody within hundreds of miles who could shed light on the events that occurred there near the turn of the century.

The town was founded as the center of Dar al-Kuti by Mohammed as-Sanusi (var. Senoussi), the last great slave-raider to fight the Europeans. Sanusi moved to the region from up north, acquired arms, and proceeded to decimate the northeastern part of what is now CAR. He settled many people in the strategically located town that eventually was named for a rock that overlooked the valley below. Sanusi was assassinated by the French lieutenant resident in the camp below town in 1913, and the French eventually settled everybody in the valley. The ruins of the original city can still be toured, as I enjoyed doing many times, including going there with Sanusi's grandson Babikir and a cousin.

There continues to be a sultan resident in Ndélé, which stimulated some cultural activity. For instance, I became friends with a master musician named Amara who could make a living by playing for the sultan and around town. At the time I lived there, Ndélé was somewhat puritanical because of the strong Islamic influence: there were no bars and people were fairly discrete in many ways. That seems to have changed in more recent times.

I was there as a Peace Corps volunteer. My main job was teaching at the local secondary school. I also wound up in charge of a construction project at the school, and for a time the construction of a catch-basin at the spring above town.

Although daily life was often extremely frustrating because I was so far from home and so many things didn't behave the way I would have liked, there were numerous pleasures that I recall more often. I had great friends, like Yaya the tailor who was from Sudan and didn't share much common language with me; Jacques, Ali, and Malik, 3 brothers who were commercants, neighbors, and tremendous supports to me; my students, especially those from the villages of Kottisako and Digba to the south like Lopère Jean-Nestor; the chef du génie rural, Thaddéus Ozzenguet, who saved me several times during the construction projects and was always genuinely nice; my colleagues like the brilliant Eléguendo Joel; Americans like Mark and Tony and Pete and Barbara; and many others. The land was almost as important to me, with the vast skies, the birds, places like Koumbala and the rocks above town. This is one of the most beautiful places on earth, the people are wonderful for the largest part, and it remains obscure. I wish I could visit.

Modeles Finis: an article I wrote for the CAR math teachers bulletin about using finite models of the plane and groups, with examples produced by some students

From the 70s reunion in Bethesda

Tales from the Heart, a comic book by Cindy Goff.

A story by Rick Bradshaw about making lots and lots of money in CAR.

A document sent by Jean-Pierre Mara detailing the founding of Bangui in 1889.


Picture of houses, people, and flame trees by my house

An assemblage of film footage and independent soundtrack: 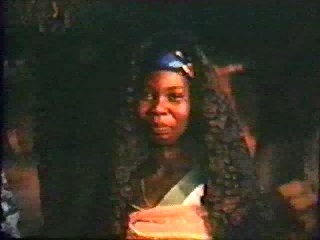 These are huge files but very brief, poor quality movies. The originals are in color, these are little samples that are in black and white. They are not recommended unless you have a Quicktime player, a fast connection, patience, and a whole lot of interest in seeing and hearing things from CAR.
Dinny Rasmussen and Ted Killham working on finishing school building, with Musiki on soundtrack (7.7M)
Mixing concrete at school construction site, with Musiki on soundtrack (7.4M)
Lopere Jean-Nestor, a student, working at the board solving a quadratic equation - more Musiki (2.9M)
Proclamation, where the students are given their grades in front of everybody - yet more Musiki (9.8M)
Tearing down the roof of the old school, with koundé playing on soundtrack (7.5M)
Students goofing around just before I left Ndélé in 1978, with Musiki singing about Sala Ngia ("having fun" is one translation) (9.5M)
Tony Nathe pushing a wheelbarrow filling up the floor with rocks, Musiki one more time (9.8M)

Some better quality, color clips as of August 2001:

Amara, a Tchadian keita player who lived in Ndélé for awhile

Playing for money, is a nice example of Amara's playing, with film shot before I knew Amara of several keita players and drummers earning their nguinza
Amara and Ali, has amusingly distorted audio that should be ignored, but shows Amara and his horn
Le Roi Pélé, is Makombo Antoine playing a little balophone behind Amara's audio.
Moussa the Hausa is more of Amara, but shows a cattle herder who would come through town and scare and entertain the children.

kodro ti Senoussi, has audio by Musiki, the top band in Bangui in the 70s and 80s. The film shows some of the ruins of the original city of Ndélé, capital of Dar al-kuti, founded by Senoussi in the 1890s, and the people are grandchildren of Senoussi.
Some finish work on the school, has audio by Musiki as well. Peace Corps volunteers shown include Mark Rand, Dinny Rasmussen, Ted Killham, Tony Nathe, and me.


Letter about current CAR situation
suggested letter to editor
Long letter about CAR, with some history

Here is an excerpt of a message from Neil Kromash, who sent the above letters:

Things in CAR seem to have calmed down, although the city, according to my contact sources, remains somewhat dead. Small-scale local activity seems to be reemerging slowly, but the expatriate institutions which bring in the jobs/money are mostly still gone. In this time of downsizing, CAR's brief moment of chaos seems to have been enough of a convienient excuse for NGOs and government agencies to abandon the country for more high-profile or up-and-coming development prospects, like South Africa or Benin. It's sad that a country that has so much to offer has been relegated to the backwaters. This is especially so when considering the fact that we (the West) forced elections and democracy down CAR's throat, and then we did nothing to support it. One ounce of prevention....

The evacuated PCVs have all gone their separate ways -- some will be reassigned to other countries, some will COS, and some are traveling. Peace Corps has officially "suspended", not closed, its program in CAR, but future prospects don't look good at all. Peace Corps has a finite, increasingly shrinking budget, and CAR is a low priority compared to other new Peace Corps entry programs such as Haiti, Jordan, and S. Africa. I hear the money for CAR, in fact, has already been reallocated around the agency. One bright note -- Pauline Voga, APCD/Health, has found a temporary stint working as PC/Niger's APCD/Health.

By the way, Michael Shereikis, a CAR RPCV from my group, is responsible for the 2 editorial letters.

Neil Kromash wrote an article that provides an overview of CAR's history, especially politically. Neil will probably send you a copy of this paper, titled "Swimming upstream: external dependence and political change in the Central African Republic", if you write him.

This organization is now long defunct. However, perhaps it will get resurrected.
alan@adale.org
My home page