There has been some controversy in the literature [Daniels, Pettigrew and Norman, J. Neurophysiology 41:1373-1393, 1978; Stark and Dubin, Vision Research 26:409-414, 1986] over the existence of cells in the A-layers of cat LGN that respond at both luminance increment and decrement. In the course of the present experiments I have come across cells that appear, at the least, to be ambiguous in their ON or OFF categorization. Here are two examples.

Several well-isolated cells responded to both dark and bright stimuli. Below is a Y-N cell from a 90 day old kitten that responded to both phases of sinusoidally-modulated spots (A), twice per cycle to drifting gratings (B), at short latency to each luminance step of a flashing spot (C), and strongly though poorly patterned to briefly-flashed bars of both contrasts (D). 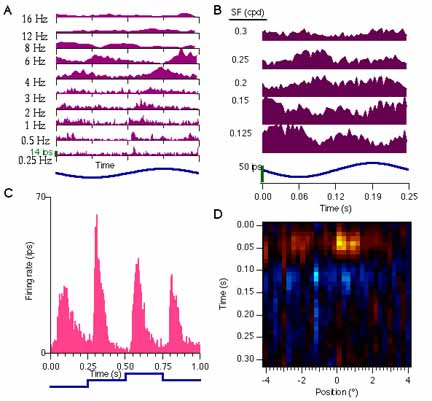 Below is an X-L cell from an 83 day old kitten that seemed to give lagged responses at both dark and bright steps. Although difficult to see in B, there was a weak early dark inhibition, followed by a strong late dark excitation, as expected in a lagged OFF cell. However, there was a later very strong bright excitation, matching the strong but late lagged ON response seen in the flashing spot histogram (A). 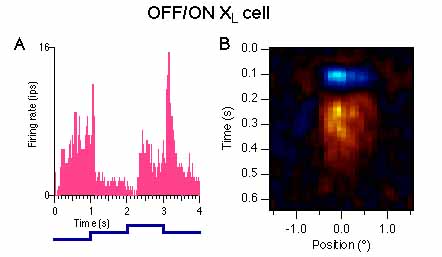