About 200 cells were sampled, though not all tests were available from every cell. Here we show distributions of parameters measured from the flashing spot (on the left) and the sinusoidally modulated spot (on the right) tests. Green squares represent subjectively categorized nonlagged cells, red circles represent lagged cells, and blue crosses represent cells for which I could not find any basis for categorization.

In young kittens, halfrise and halffall latencies are much longer, and don't distinguish apparent lagged and nonlagged cells. Similarly, phase latencies (also known as integration time) are long and similar across cell types. One of the novel findings here is that lagged cells in young kittens have absolue phase leads. This presumably reflects the weakness of the inhibition at these ages, since it is that inhibition in "mature" lagged cells that is responsible for the absolute phase lag according to our current model.

So, in summary, there are two general findings:

The notation G.M. in the boxes below means geometric mean (note that latency axis has log scaling). Arrows indicate these means. In adults, halfrise latencies of nonlagged cells are all less than 70ms. Long latencies persist to fairly late postnatal ages. 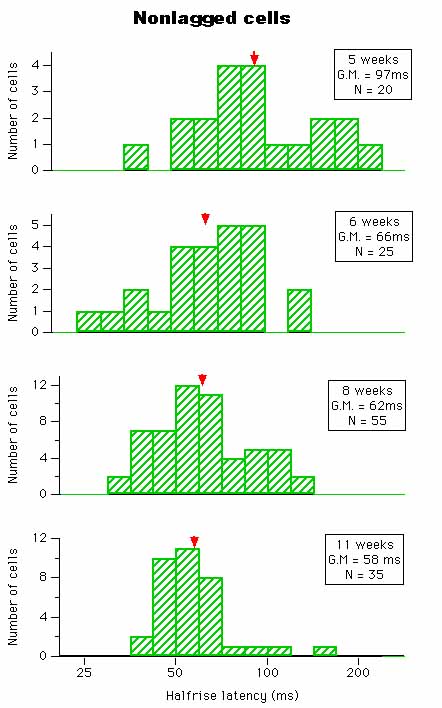 In adults, lagged cells show absolute phase lags (above 0 cycles). In young kittens, few cells exhibit this behavior. Almost all cells (including nonlagged cells, see above) are fairly sustained (absolute phase values near 0 cycles). At later ages some clearly lagged cells appear, presumably as the inhibition develops. Although ultrastructural studies indicated that this inhibition develops by 6 weeks, the functional maturity comes much later. 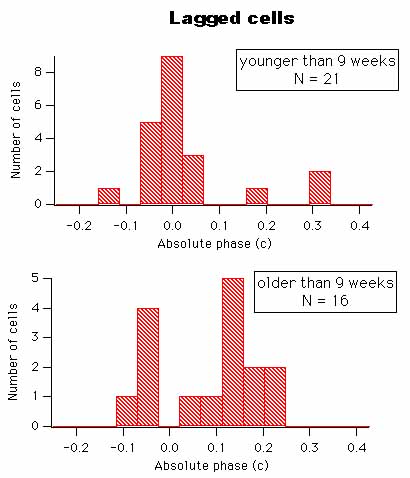 Summary of temporal resolution distributions for all cells

Temporal resolution was measured from the sinusoidally-modulated spot data by fitting the amplitude vs. temporal frequency points with a difference of gaussians function. In young kittens resolution is strikingly low, with many cells not responding beyond 3Hz. No cells from the youngest animals had resolutions beyond 32Hz even though some appeared to be fairly mature. 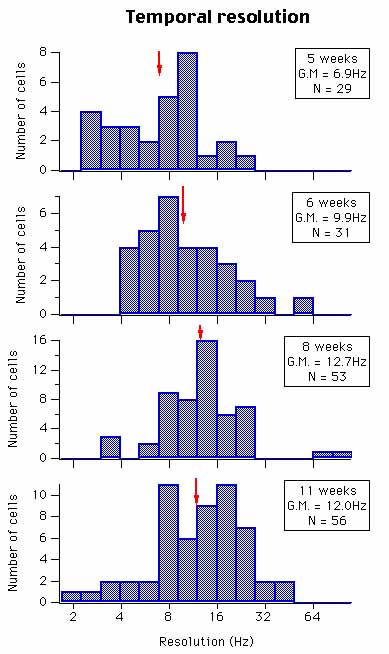