Vladimir Simosko prepared the following list of film records of Dolphy. I have added comments.

Note that many of these clips have been placed elsewhere on the net at this point as well.

This is probably the best-known Dolphy on video. Widely available. Excerpted repeatedly in Last Date.
Video of concert 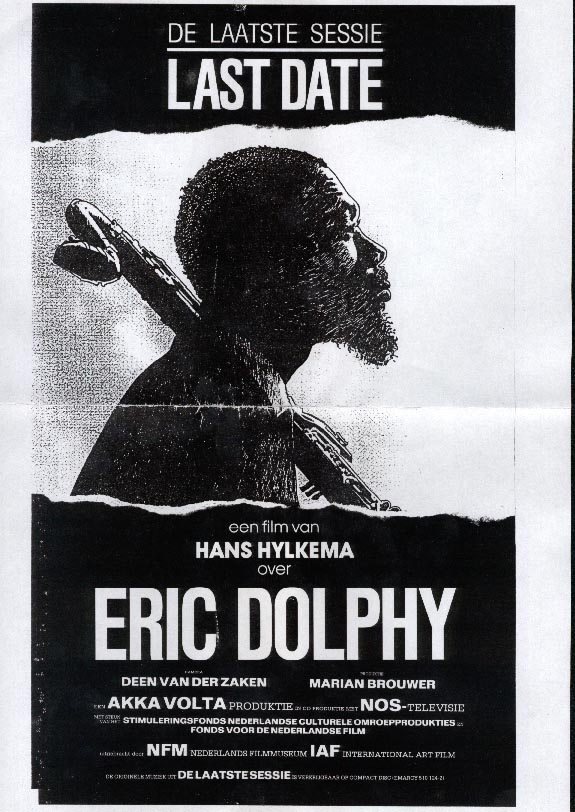 Last Date Poster, thanks to Paul Karting, who was responsible for much of the documentary, but is not happy with the way the filmmakers ended up using his efforts.

There is a 92 minute film by Dutch director Hans Hylkema titled "Last Date: Eric Dolphy". The US premiere was at the American Film Institute Film Fest June 22, 1992. Thanks to Steven Stovall for this info. Here are some comments from Steven: I took my father to see the documentary "Last Date: Eric Dolphy", which had its US premiere at the AFI Film Fest here in LA. It was a gas for him since he grew up with Dolphy, Mingus, Dexter Gordon, Buddy Collette, et al in pre-WWII LA. The film had an astonishing amount of material: interviews with the "Last Date" quartet, Buddy Collette, Richard Davis, Dolphy's fiancee Joyce Mordecai; archival footage of his last gig with Mingus (there was a hilarious moment when Mingus, irritated by Dolphy's long solo, moves the microphone); quite a bit about his last days in Paris and Berlin (he died of a diabetic condition, no drugs were involved); even some musicological analysis (several people comment on his use of "huge" intervals, his incredible virtuosity, his use of the "language of the birds"). A must-see for anyone interested in Dolphy.

I now have a copy of this I'd be glad to show anybody who can visit. Sorry it isn't available through dubbing. However, it is available commercially now, Rhapsody 9028. Thanks to Nathan Wolfson for filling me in on that. It starts with an actor playing a contemporary 60 year old Eric who meets Thierry Bruneau, a Dolphy fan featured in the film. Thierry gets to learn from Eric directly in this fantasy, but the film cuts then to the reality of Bruneau at home talking about how Eric lives for him through his music. There is some of the Oslo A Train, Bruneau again, then the introduction to the reenactment of the Last Date session that gives the film most of its structure. Most of the rest of the film uses the pieces from that session, starting with Epistrophy. There is a good interview with Han Bennink, who likens Eric to a hawk. A funny interview with Tinus Bruin, an alto player who describes his initial and subsequent reactions to playing with Eric, is included. South Street Exit is then used to first go to Los Angeles, where Roy Porter leads Bruneau to Joe O'Con's house where Eric grew up. Eric's aunt Luzmilda Thomas has something to say, as well as a neighbor, and finally Buddy Collette tells how Eric "had to go to New York". South Street Exit then takes us to New York, where Ted Curson, Richard Davis, Jaki Byard, and Gunther Schuller are interviewed. Byard is particularly nice. Mingus' solo from Meditations in Stockholm (or is it Oslo?) is cut in, as well as the microphone moving scene during Eric's solo on A Train. Mingus is heard (barely) to comment to Eric "I'm gonna miss you asshole". Gene Lees tells a familiar story, Byard tells why he stayed in Europe, and we then meet Eric's fiancee Joyce Mordecai, who mentions that Eric was one of her cousins, or at least she originally thought so. The Madrig Speaks, The Panther Walks takes us to a zoo, and Bennink gives more animal metaphors. Bruneau talks about intervals, then Harry Sparnaay plays God Bless the Child from a transcription on bass clarinet. Hypochristmutreefuzz then leads to more discussion of the Last Date session. You Don't Know What Love Is takes us back to Joyce Mordecai who shares her view of Eric's music. We are now in the Paris days, with interviews with Daniel Humair and Nathan Davis. There is a frustrating glance of Bruneau opening an envelope of photos (Trane, ...) but the pictures are never shown clearly. A visit to the Selmer workshop leads to a fairly long excursion into Eric's final illness and death. Miss Ann takes us to Berlin, and Karl Hans Berger and some people involved with the final gig at the Tangente discuss Eric's intake of sugar and their memories of the ill Eric. Joyce mentions uremia, but this is not otherwise pursued. Eric's death is treated in some detail, and a bit of Ted Curson's Tears for Dolphy is played. The film ends with Eric's solo on Serene from Stockholm.